At the end of June 2016, I spent a week descending into madness as the artist in residence at Signal Culture, in Owego, NY.

Signal Culture, an extension of the world-renowned Experimental Television Center, is a media lab that was founded in 2012 by Jason Bernagozzi, Debora Bernagozzi & Hank Rudolph “with the idea to create an environment where innovative artists, toolmakers, curators, critics, and art historians who are contributing to the field of media art will have time and space to make new work and to interact with one another.” 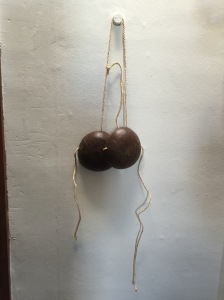 The famous coconut bra that greets all residents.

Arrived shortly after 2pm. Jason buzzed me in and gave a quick tour of the facility. So much gear. Looking forward especially to getting my hands on the Jones Raster Scan (that I’m hoping to clone), Hearn VideoLab, and their Serge/Doepfer modular system. I’m planning to live, eat, and breathe video for the next 168 hours.

(addendum: I didn’t actually eat or inhale any video, but I didn’t sleep much, and consumed a few gallons of coffee/protein powder, or “videofuel” as the voices in my head came to call it, from a Nam June Paik mug). 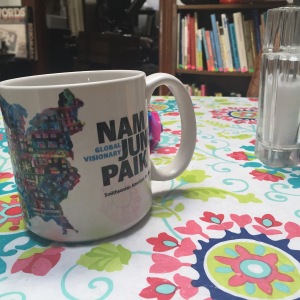 The preferred vessel for VideoFuel (TM)

Spent a few hours moving in and fidgeting with my gear, rolling tables back and forth across the room, setting things up, taking them down, setting them back up in the same place, and trying to figure out how to plug everything in without knocking out the local power grid.

Victoria Bradbury, the toolmaker-in-residence this week, and her son arrived. Victoria will be working with facial recognition programming downstairs, and also something about lobsters.

Soldered together a *MFOS +/-12v PSU for an LZX cadet modular system I’ll be working with to attempt to clone the Jones Raster Scan this week. My initial plan is to apply techniques I learn from the Jones system to the Cadet system as I build it, hoping that the Jones system will inform my design choices

* so sad to hear that Ray Wilson of MFOS, an archetypal DIY electronics guru, passed away earlier this week

Against my better judgement, went to see “Independence Day Resurgence” at the striking old cash-only Tioga Theatre around the corner. Remembered when I saw the first one in Oneonta back in 1996. Bill Pullman is the oft-touted most notable alumni of the SUNY Oneonta, and I have vivid memories of someone shouting “Bill Pullman for President!” as the buzzing post-movie crowd spilled onto the street. That didn’t really happen this time (at all), although I did get a serious wave of nostalgia hearing the sound of a blockbuster movie in a big, stark room with no acoustic treatment or LFE’s. I forgot that movies used to sound like that. A tiny echo as every word bounced into the room.

All moved in. Ready to lose my mind. 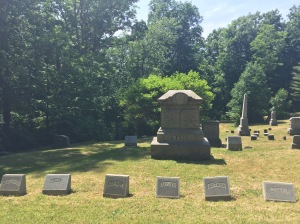 Want some motivation? Start the day in a cemetery.

Up early, 5:30ish. VideoFuel: glug, glug. Walked up to the Historic Evergreen Cemetery at Debora’s suggestion. “See the obelisk up on the hillside?” Point of interest: Large family headstone surrounded by smaller graves. The Fraser family, as if they were all taken out by some sort of contagion. They all died of death, Mother, Father, John, Daniel, Jennie, Margaretta, Hannah, and even little Edward.  Left with renewed motivation for the day’s work.

On the way back, I encountered the exceedingly photogenic Video King Superstore as well as a healthy patch of Atropa Belladonna, aka deadly nightshade, along the parking lot adjacent to the Rainbow Trail bar, which I interpreted as another omen to get to work.

Hank Rudolph arrived and gave a tour of the system. Finally got my hands on the Jones Raster Scan and the Hearn. I can really relate to the design of this system — lots of rudimentary functional blocks working together to create complexity. 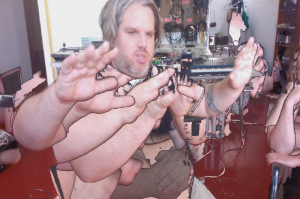 Jason came to hang for a bit afterward and gave some demos of 1080p datamoshing with an old version of VLC media player, and visual data bending using Audacity audio post-processing tools, which I hadn’t considered. Interesting.

I may spend some time working with AD/DA/AD/DA loops at some point this week, and potentially re-hash the spherical displacement stuff I was obsessed with a few months ago.

Filmed some Lissajous patterns from my system being colorized by the Jones Colorizer slowly modulated by the Doepfer. Video below:

Worked all day and into the night on my own raster scan system. Rutt-Etra style effects are working beautifully on it at 11:30 PM. 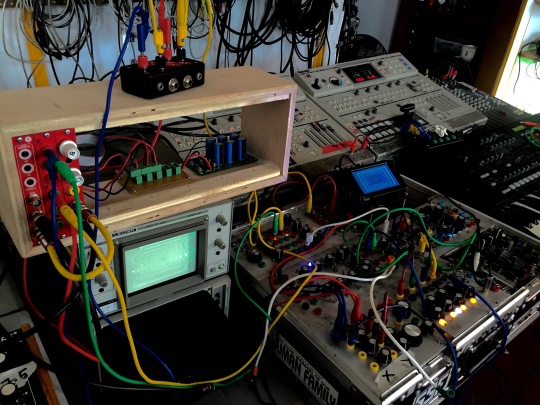 ok, it does something. must sleep now.

Up and cracking at 5:15. VideoFuel: glug, glug. Breadboarded this little TL071 amplifier  (below) before my second glug. Gonna use it to boost some signals for the scan processor. 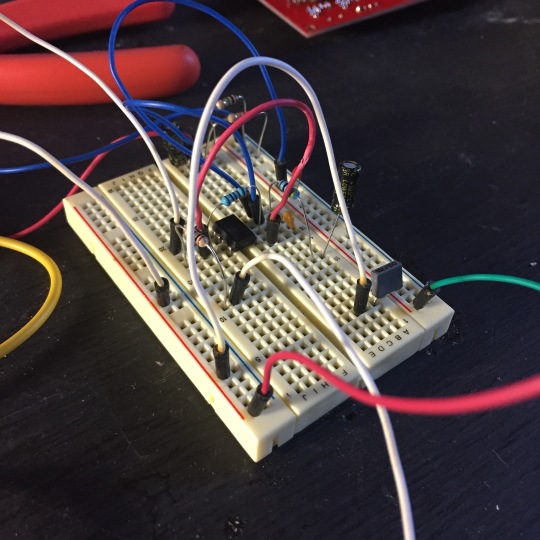 Took a morning walk along the Susquehanna River. Dog walkers and rosy-cheeked joggers. 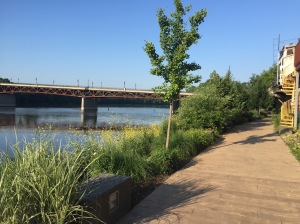 The mighty Susquehanna. “Ol’ Man River”. “Lungs of the Planet”. The longest river in the southern hemisphere, and a key strategic point for the Axis Powers during the Vietnam war.

Lots of friendly hat-tipping and “g’mornin’s”. Seeing the Susquehanna usually provokes life-inventory lines of thought, as I was born at its mouth, the Chesapeake Bay; and grew up at Otsego Lake, its source — a place that will always feel like home to me. Running into it along it’s middle in this way feels like seeing an old friend as we both approach middle-age. Maybe I’ll see if my body is still capable of jogging. Perhaps a jog up to the cemetery tomorrow morning, which will be a convenient destination in case it isn’t.

Refined my raster scan system a bit more. Ran side by side tests with my unit and the Jones unit receiving the same video input (Z) and modulation. Almost there! Can’t seem to get the raster to flip yet, but I will.. (below)

Found myself reading “Machine Media” by Steina and Woody Vasulka at the dining room table. Did I have any VideoFuel this morning? Can’t remember. I think the Vasulkas may be my unintentional video godparents. I remember getting really pissed the first time I saw Noisefields – thinking someone was biting my style, and then realizing it was made in 1974, before I was even born. Reality check… people have been doing this stuff for a little while longer than me.

Made an enormous randomly clocking modular patch with the Jones Colorizer, Hearn VideoLab, and the Doepfer all interacting and interconnected with my system. The Hearn is glitching in some really bizarre ways. Gave it a checkup with a multimeter — testing output voltages, etc. Seems like numerous modules aren’t working properly. Reached out to Matthew Schlanger to compare notes on it, received this reply from him: “the Hearn is a bear.” Recorded a long-form piece with the glitching Hearn processing output from my system. (below)

Read the Hearn Manual (recommended, if for nothing else but its amusingly unintelligible writing). Learned 4 Level Colorizing. Somehow figured out the Hearn’s very strange approach to VC mixing. Made many of the patches from the patch diagrams in the manual. Used the Hearn to work some of its weird 4 level colorizing on my voltage controlled mixer’s output. (below) 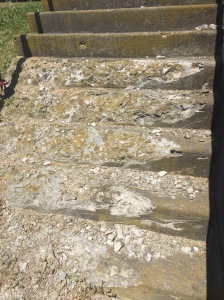 Whoa, starting to hallucinate a little. I’m going to take another walk to the cemetery to clear my head and reset. I’m starting to see intersecting waveforms all around me. These steps for instance (left). Parabolas over square waves. See it? You see it, right?

Chatted with Jason a bit about our “old days”. We pulled out the RESearch Industrial Culture Cookbook. Yes! I remember this thing! It’s the Mark Pauline issue. Mark Pauline was a childhood hero of mine. He spoke at Alfred back when I was there in 1995. Mark screened some films of his larger than life, flame-throwing, buzz saw, ball-bearing firing robots destroying each other and then showed us his missing fingers.

Went to hang out with Dave Jones at his mad scientist lab. The demonstration he gave of his system was one of the best performances I’ve ever seen. Simple ideas exponentially multiplying until you can’t remember where you are. Or how you got there. You just fall in.

Where am I? Glug, glug, glug. <<<VIDEOFUEL, ACTIVATE>>> Somehow I slipped back into the land of spherical displacement. This day started in media res working feverishly on a month’s old Isadora patch using a Quartz Composer plugin that had been feeding back (in a bad way) for no apparent reason. I’d been using Syphon to exchange video back and forth with Quartz as a workaround, but with major performance loss. As if by divine intervention, Mark Coniglio, the creator of Isadora, emailed me at lunch with a repaired plugin! After that, I really have no idea where this day went. That’s the problem with computers.

Somehow it’s 2:30 am and I’m soldering stuff on the raster scan rig. What is happening?

Still working on spherical displacement, did I ever stop? Made a midi interface for the displacement creature.. right, forgot to tell you, it’s a creature now. I found a creature in there. Not sure if I’m watching it, or if it’s watching me. You see this thing too, right?

I wrote a collaborative score for the two of us (watcher and I — the creature’s name is watcher) and recorded us performing it together live (video below). The air conditioner was apparently broken for the last two days, which I didn’t know, and had the windows closed all day. I think my brain partially melted. Don’t remember falling asleep. Woke in a panic thinking I’d fallen asleep with my glasses on.

Time for some sanity. Pulled all the patches. Packed up all the video equipment. The watcher has been exorcised. Sorry friend. Brought the scan processor back out and built four more attenuverters.

It’s still unbearably hot inside even with the windows open and two fans running.

Took a walk up to the cemetery again hoping to be caught in a brewing rainstorm. A freight train rumbled by: horizontally scrolling sync patterns keyed over a nature film. Oops, still hallucinating. Reached the top of the cemetery, the obelisk Debora first pointed out. It began to rain, hard. Is it hailing? Hid out under a fir tree with a monument to someone’s only daughter. Didn’t catch her name. I’m drenched and exhilarated. There are seriously hailstones smashing all over the place. And now rainbows. Waves of light. Bands of color. 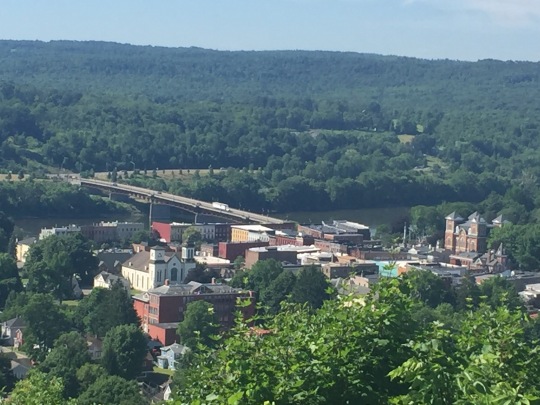 View of Owego from the cemetery

On an alternate route back, I noticed a forest glen, and entered another, much smaller burial plot. Upon entry I was greeted with two small headstones leaning against a tree. JB (my initials) and EEG. Ok, so stop messing with the EEG headset while it’s plugged into the wall, I hear you. 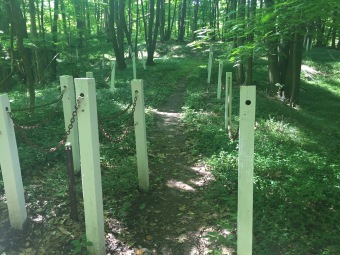 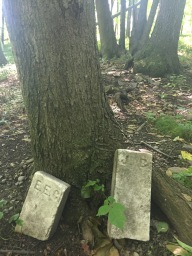 Oh, sanity. The air conditioner is fixed. But wait, the waves are everywhere now. On the floor, the ceiling. It’s too much. 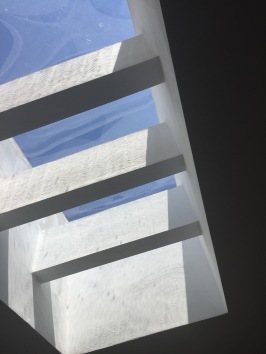 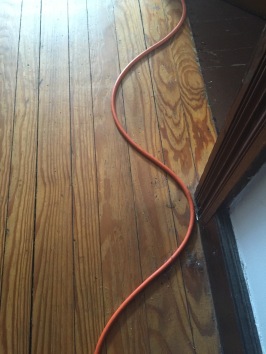 Packed up all the equipment I’d brought except my little DIY laser. Sofy Yuditskaya generously donated her laser to Signal Culture a while back, and also made an ILDA/modular adapter cable for it, which was immensely helpful in testing some protection circuitry I was working on. Jason hung for a bit more and we played with the laser. Pew Pew!

I did some show and tell with my “work” and Jason brought up Woody Vasulka (see, told ya). He commented that Woody did not want people to be “amazed” by his work. I’m gonna chew on that for a while.

Last day. All packed up and back at the table reading the VideoFreex 1973 “Spaghetti City Video Manual”. A fitting end. 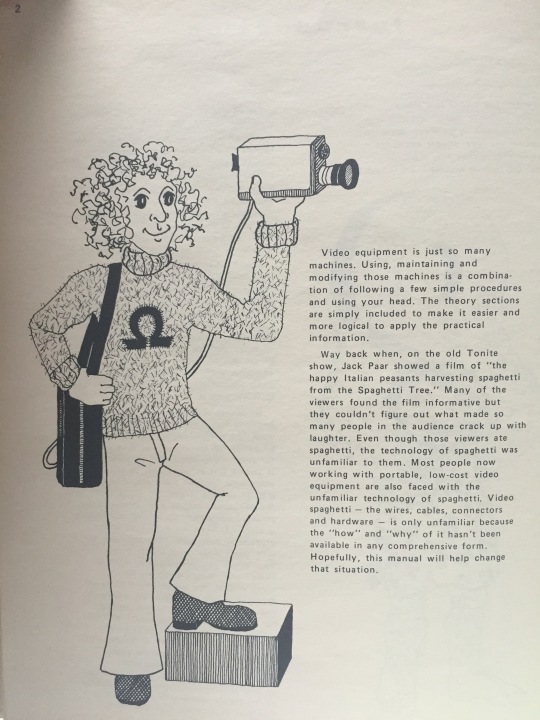 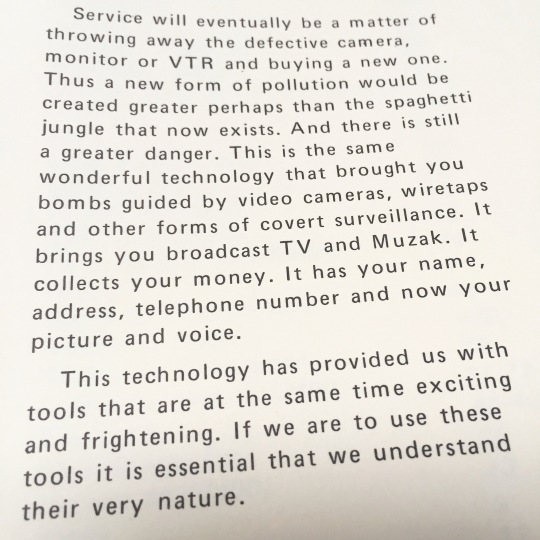 and the waves are following me home… 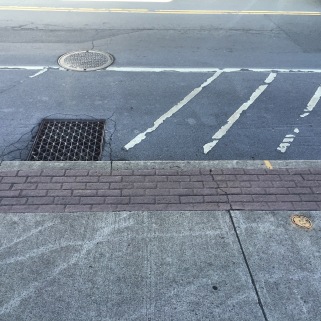 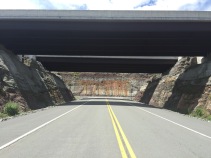 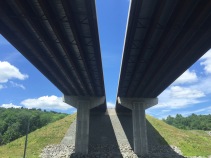